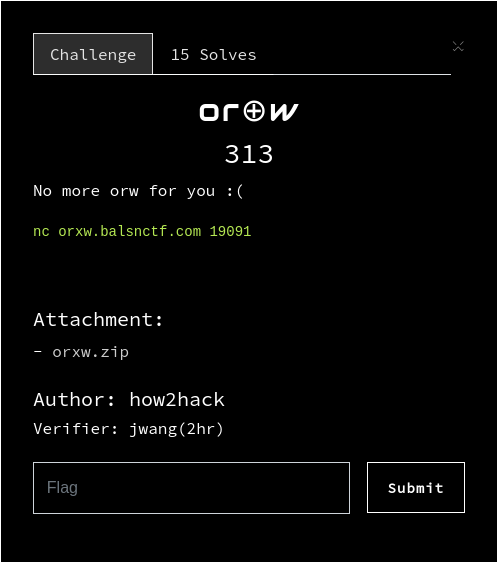 or⊕w was the easiest pwn challenge from Balsn CTF 2021. There were 3 more Pwn tasks, which were really hard. In total there were 4 pwn challenges and I only managed to solve or⊕w. Here is the list of Pwn challenges.

Here is the checksec output -

I really liked or⊕w challenge because it was not like any other ROP challenge, it was a combined mixture of several different concepts together. I learned a lot from this challenge. 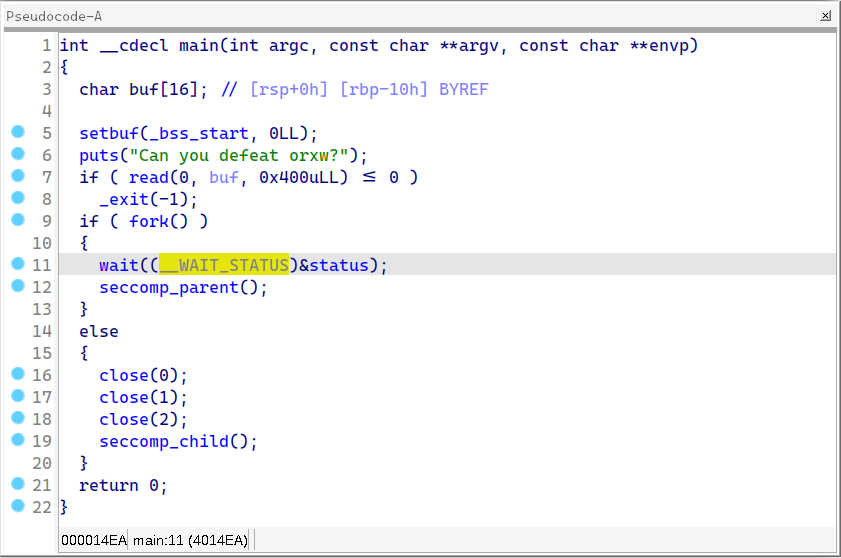 In this beautiful decompilation given by IDA, you could easily spot the vulnerability. Its a very obvious Stack Buffer Overflow Vulnerability. The stack only reserved space for 16 bytes but the read() function is reading 0x400 (1024) Bytes in input. But if you look closely, you will see that its not your normal buffer overflow challenge.

After the call to read() we see that the program calls fork() and handles both parent and child differently. If you don’t know what fork() does, basically it creates a clone of the process with exact same execution state and only one difference and that is the return value of the syscall. fork() is actually just a wrapper around the fork syscall (actually it’s a wrapper around clone syscall, clone has more arguments). The newly created process is called the child of the original process and the original process is called the parent process.

The return value of the fork syscall will be different in parent and child so that the code can diffrentiate if its running in the child or the parent.

When fork() return a non-zero value, that means we are in the parent and this non-zero value is the PID (Process ID) of the child which was just spawned. You can see in the above code that if we are in the parent then we call the wait() which is just a wrapper around the wait4 system call. wait4 system call will wait (blocking) for any change in the child state of the calling process.

In the code above you can see it calls different seccomp functions to create different syscall filters in both parent and child. Seccomp filtering provides a means for a process to specify a filter for incoming system calls. These filters are sort of security mitigations to limit the damage if the process is compromised. The filters allow you to blacklist a bunch of syscalls and only allow few selected syscalls which the programmers thinks are safe.

It closes stdin, stdout, stderr in the parent so we cannot do funky stuff in the child process. One thing I could not notice initially was the fact that the status word was stored on the .BSS section, which was very crucial for my exploit.

So let’s now analyse the seccomp filters of the child process and the parent process. 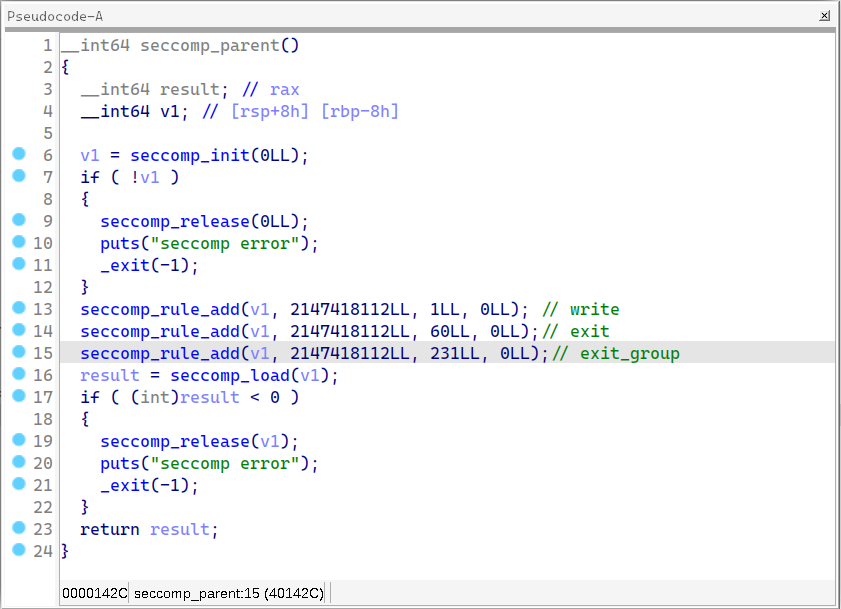 This function applies the following seccomp filter to the process.

Performing any other syscall will result in the process being killed by SIGSYS (Bad system call). 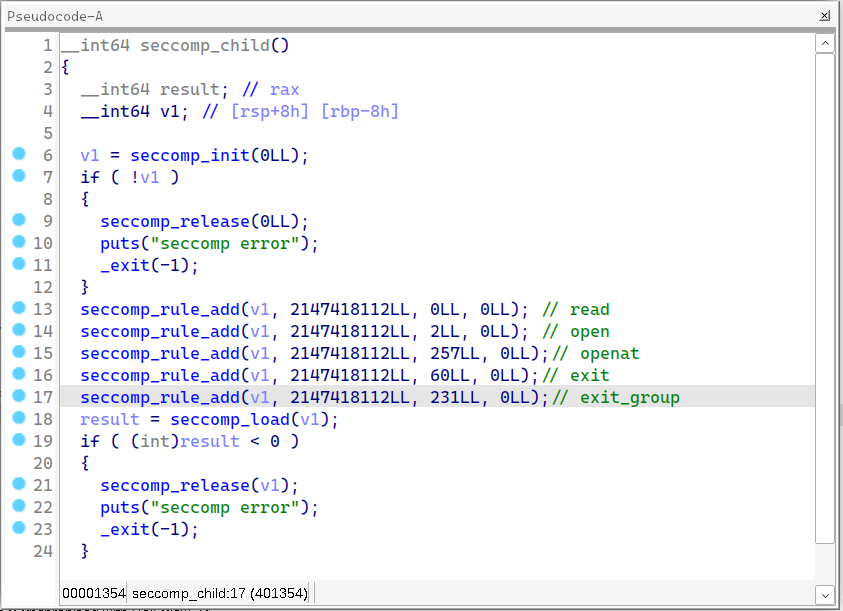 This function apply’s the following seccomp filter to the process.

Now Let’s see what happens when the buffer overflow happens. We will send random data to the binary and we will observe the execution of both the child and the parent.

As you can see in the above image after the clone syscall, which is what fork() uses for some reason that I don’t know, we see that child is spawned with PID 23852 and it gets a SIGSEGV signal and crashes with a segfault. Same thing happens with the parent but the difference is that it does not happen parallelly as one would expect and it only happens once the child has exited/crashed.

It is because the parent does a wait syscall and it wait for the child to terminate first.

Obviusly system() or ONE_Gadget won’t work because they all eventually do the execve syscall which is blocked in both child and parent. So, how do you get the flag 🏁 ?

One would say that just open the flag and read it in the child and then write the flag out in parent, but the memory is not shared in child and parent so even if we are able to read the flag we cannot just send the flag to parent to write it out on stdout.

Also, if we create a ROP chain to read the flag in child, when the same ROP Chain is executed by the parent then parent will be killed by SIGSYS because open and read syscalls are not allowed in parent.

After 2 hours of brainstorming with my friends I figured out a way to exploit this thing. The idea is to execute different ROP chains on parent and child, but before trying to find a gadget that does this let’s create the individual ROP chains for child and parent.

Our goal is to read the “flag” file in child because open and read syscalls are only allowed in child. But, there is a problem that is we don’t have a way to call open as of now. We can call read but before that we must open the file.

This is the most powerful gadget you can find in an ELF compiled by GCC. 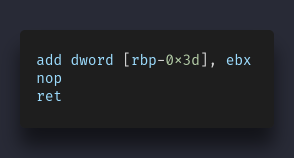 This gadget allows you to modify memory by adding a 32 bit value to that memory. With this gadget you could easily write 4 bytes at a time. This is the gadget that would allow us to call open.

Because the binary has partial-relro we can use this gadget to make any got address to point to any arbitrary address in LibC by adding an offset to the lower 32 bits.

But to know the offset to add/subtract in the got address, we must know the exact LibC that was running on the server, but during the CTF I completely forgot that the Dockerfile was given to us and went with the old way of leaking an address and then using CTFMate to find the libc version.

I quickly crafted a ROP chain to print the got address of puts and read and then used CTFMate to get the LibC and patch the binary to use the downloaded LibC and a custom Linker just for this LibC.

Now the plan for our exploit is that we will first read the flag into child’s memory and then we will get the first byte of the flag into the rdi register and then we will do exit syscall, the idea behind this is that when the child will exit and the parent will resume execution, the status word on BSS of the parent will have the exit code of child and since child exited with the first character of the flag, we essentially leaked one character of the flag from child.

After going through thousands of gadgets in LibC and the binary I found the perfect gadget. It lives inside __libc_csu_init.

When this gadget detects that we are in parent (non-zero status word) it will jump to 0x401550 which will try to call whatever function is at [r15 + rbx * 8] and since rbx is zero it will just dereference r15 and call that address with arguments from r12, r13 and r14.

To call puts(status word) we just need to make r15 point to puts got and r12 to the address of status word in BSS. We are lucky that PIE is disabled and the address of BSS fits in 32 bits because the upper 32 bits of r12 are discarded and only lower 32 bits are moved into edi register.

Getting Gadgets from LibC

For moving the value of status word in rbp I needed some gadgets which were not there in the binary, so I used the 3D-Gadget to make some useless got functions into some usefull gadgets.

With the setup complete, lets create the parent rop chain.

After this we resolve the close GOT address to open and fix the read GOT address. We also put the flag string in memory to be used by child ropchain to open the flag.

Once you figure out how to execute different ROP chains with the same payload under parent and child, the rest of the exploitation is fairly easy.

I created a small function to give me ROP chain to leak a specific byte from the flag and then I just ran that exploit until I leaked the “}” character which means we got the whole flag.

To get a nice output from the exploit I used pwntool’s logging functionality.

Complete exploit can be found : here

Running the exploit gives this output.